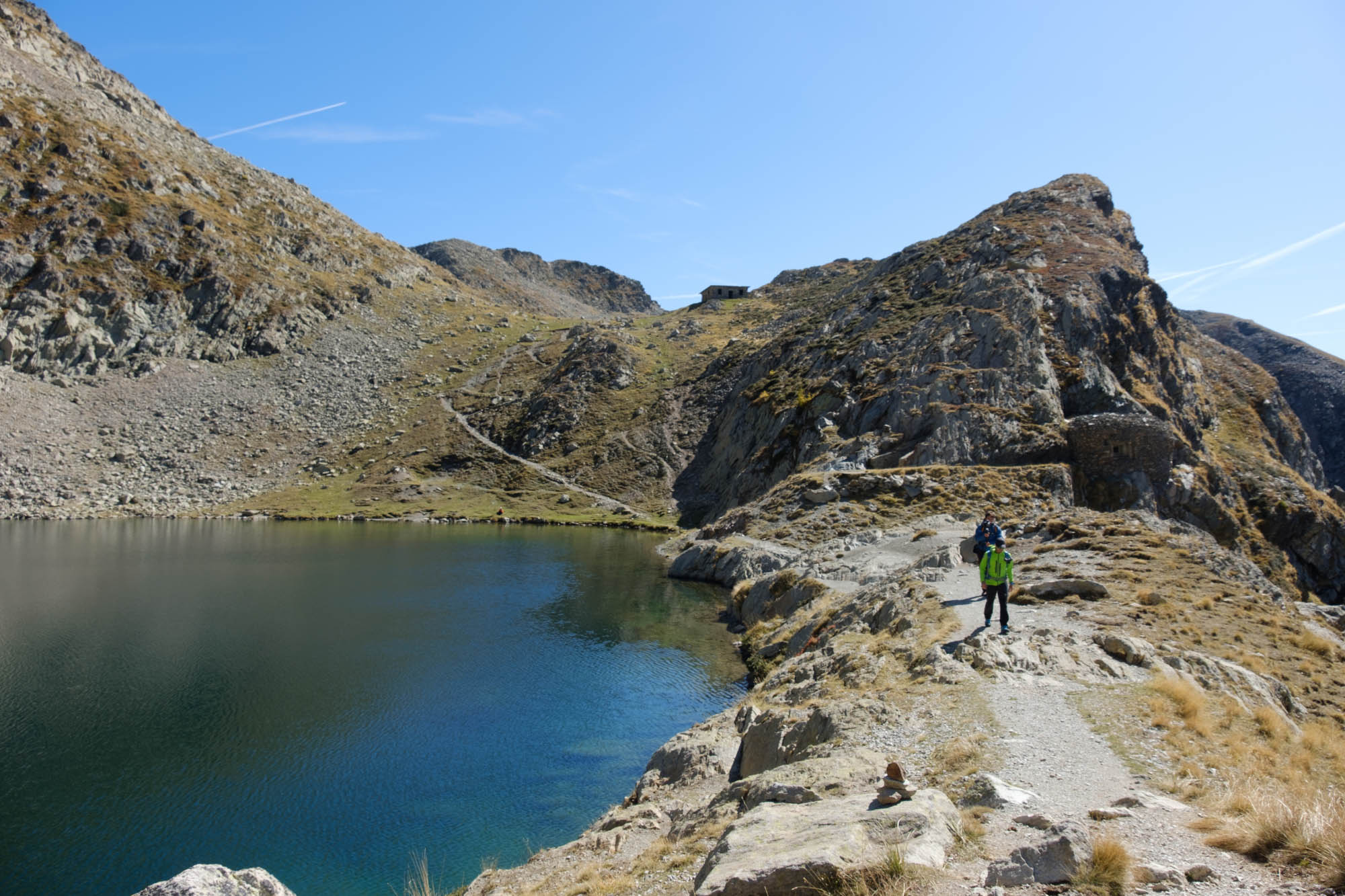 We take the asphalt road from the sanctuary that leads to the square with the apparition rock, a huge erratic boulder on which stands a statue of Saint Anna. Tradition has it that the mother of Mary appeared to the shepherdess Anna Bagnis precisely on this spot.

We now take the military road built by the army in the early XX century and after one hundred metres pass by the mule track on the right climbing to the Tesina Pass. We will return along this route. On arriving at the basin containing the small and shallow Colle di Sant’Anna lake, we skirt around it on the right bank following the cart track that unwinds gently southwards.

After passing a stretch of rocks worn by glaciers, the road continues with numerous hairpins – extraordinary testimony of military engineering – and comes to an end at Colle Sant’Anna (2307 m).

Looking out over the French slope, the rugged Chastillon valley appears, descending into the Vallée de la Tinée.

We do not cross the border but continue along the slightly uphill cart track until we reach the Tallone Refuge, originally a military building now privately owned. The road continues across a gentle, grassy basin dotted with stone ruins and a number of hairpins.

After moving around a rocky ridge, the scenery changes completely: we come to a somewhat exposed stretch which requires careful attention. We pass between slender rocky spires offering an incredible view of Lago Sant’Anna (which we will descend from on the way back). The mule track then descends a few metres in altitude and sweeps in a long semi-circle sustained by remarkable dry stone walls.

A wooden bridge with a chain help us safely across a landslide.

A little further on, we pass around a second ridge that takes us into the shady and secluded valley culminating in the ascent to Colle del Lausfer (2430 m). The small barracks on the right are often home to groups of ibex that have taken up residence here. As soon as we overlook the French slope, three beautiful bodies of water appear – the Lausfer lakes sottani, that we can admire here from above.

The trail continues to the right half-way up the slope, close by a grassy pass where the remains of barracks and bunkers dating back to the “Vallo Alpino” defensive system can be seen. From the hillock, we can admire the marvellous upper Lago Lausfer nestled under Testa Auta del Lausfer, with its reflections ranging from green to turquoise. This is an ideal place to stop and rest.

Resuming our trek, we descend along the trail skirting the lake on the left, passing over some easy rocks and continuing uphill as far as a first rise. Continuing across the grassy basin above, we reach a second rise. In all, we have to climb one hundred metres in altitude.

From this point on, the trail flattens out but becomes narrower. Taking care on the steep ridge, we reach the nearby Colle Saboulè (2460 m), the highest point along this itinerary. The high-mountain environment is rather severe.

Taking a distinct turn to the right, we return to Italian territory. The route – once again a mule track – passes in front of a barracks and continues with a long semi-circle under the steep, rocky slopes of Testa Auta del Lausfer. It is an astounding stretch, entirely mid-way up the slope on the high part of the deep Roccias Lion valley, home to two other small lakes.

Faithfully following the sides of the mountain carved into the living rock, we come out on to the scenic Tesina Pass (2400 m).

On returning to the Sant’Anna Valley, the environment changes again: we descend easily towards the last five lakes and finally to the Sanctuary to conclude one of the most fascinating itineraries in the Maritime Alps.

The Upper Lake Roburent really needs no introduction. It is the true symbol of the Stura valley, be it for its characteristic horse-shoe shape or its extraordinary position in a wide basin set amidst green meadows at the feet of the immense rocky mass of Monte Oronaye. It is a…