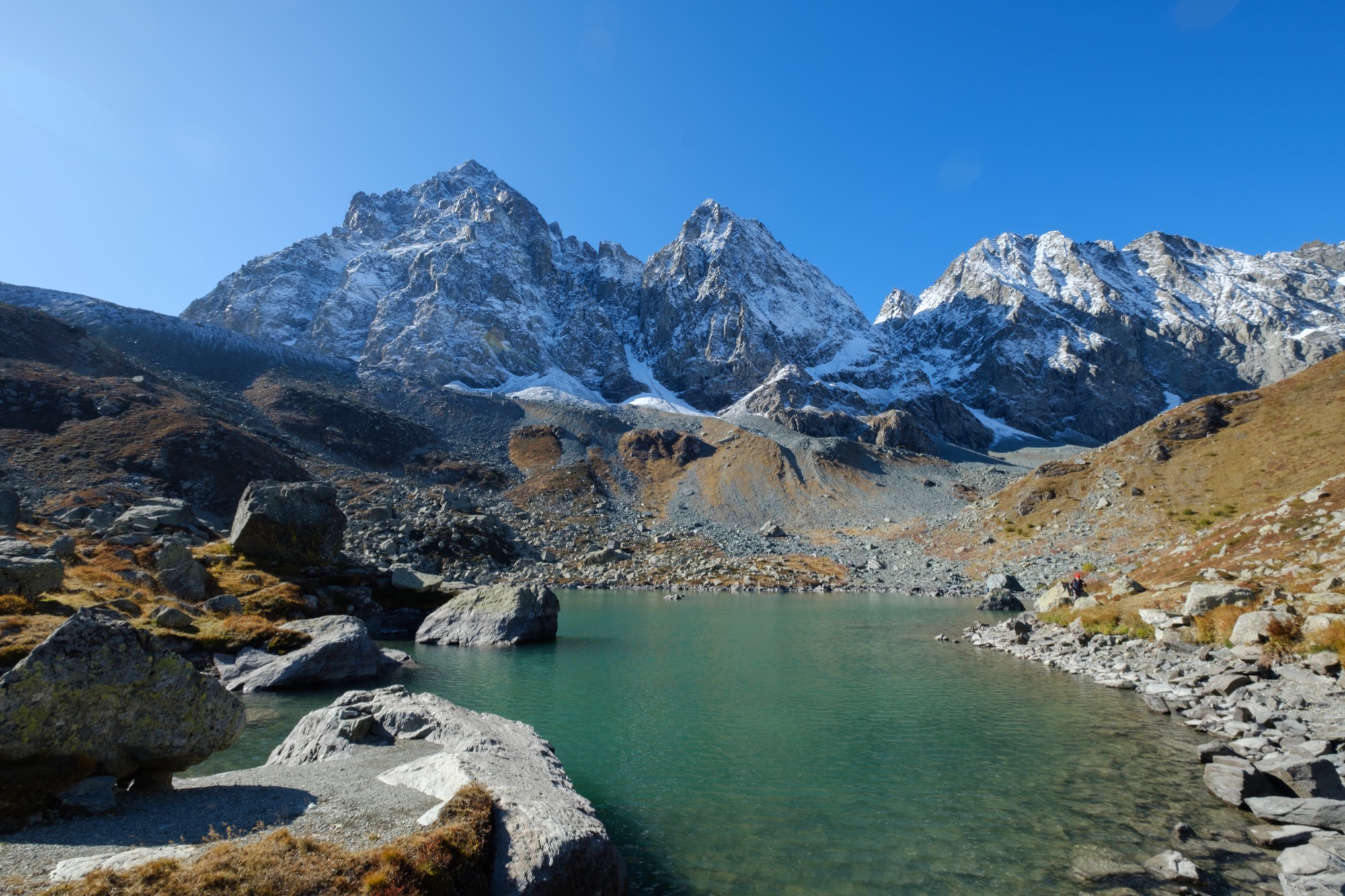 Continue along the rough track upstream from the Pian del Re parking area (2020 m) by crossing the bridge in the middle of the plateau. On the opposite side, one hundred metres further on, we reach the large boulder at the source of the River Po (as indicated on a rock). It seems incredible that this tiny stream eventually crosses the whole of northern Italy to become the longest river in Italy.

Continuing along the path climbing southwards, in less than twenty minutes we reach Lago Fiorenza (2113 m). This glacial lake on sunny days reflects the north face of Monviso, the highest peak in the province of Cuneo. This area was already a popular tourist destination in the late nineteenth century, when the boat named “La Bella Fiorentina” took tourists on a tour around the lake. After rain, it is easy to encounter on its shores the Lanzai salamander, endemic to the Cozie Alps, with its characteristic liquorice black colour.

We skirt around the left shore to the end of the lake and, leaving the track to the Giacoletti Refuge on the right, we climb upwards zig-zagging between boulders and vegetation to a grassy pass.

From here, the triangular mountain profile of Viso Mozzo stands out elegantly on the left.

The path continues on the right beneath a rocky massif overlooking the deep Rio dei Quarti valley.

A little further on, we reach a crossroads of paths close to Lago Chiaretto (2261 m), a triangular lake with an intense turquoise colour, nestled lower in a detrital basin. Its colour shade arises from a mineral – smaragdite – present in the green stones of Monviso (ophiolites).

We then follow a trail down to the shore of the lake – today much smaller than it was in the past: in summer 1989, an enormous portion of the Coolidge glacier suddenly broke free and collapsed, filling in part of the lake forever. At precisely that moment, there were two climbers in the Falchi-Villata bivouac perched at 2680 m on a rocky outcrop in the lower part of the Coolidge gully. They were caught by the avalanche but miraculously remained unharmed. From the lake, with a keen eye on the view towards the north-east face of Monviso, both the gully and the bright red bivouac are clearly visible.

On returning to the crossroads, we follow the indications for Lago Lausetto. Away in the distance, we can hear the stone landslides cascading from the north-east face of Monviso. After a number of hairpins, we ignore a path on the left leading towards the Quintino Sella Refuge and keep to the right, crossing a scenic grassy basin surrounded by a crown of vertical rock faces.

On the way back down, we pass by the deviation to the left towards the Giacoletti Refuge. There appears below us the small, shallow and elongated Lago Lausetto (2324 m).

Between Lausetto and another small pool, do not take the path going down to the right towards Lago Fiorenza but continue first over boulders and then on the trail again.

After taking a bend, Lago Superiore (2313 m) appears suddenly in all its beauty; large and deep, is sits on a balcony exactly two hundred meters above Lago Fiorenza.

This is an ideal place to stop and rest.

On resuming the trek, we descend along a steeper path flanking a head-spinning scenic point. Just below here, we face the only stretch where we have to pay close attention: the crossing – well-equipped with ropes and chains – over the waterfall of the emissary from Lago Superiore. It is more difficult at the beginning of the season, when the flow of water from melting snow is significant.

We continue the descent halfway up the slope as far as the entrance to the deep Traversette valley. We cross the torrent and follow the mule track – an ancient salt road – downhill back to Pian del Re, where we conclude this wonderful tour in front of the majestic Re di Pietra (Stone King).