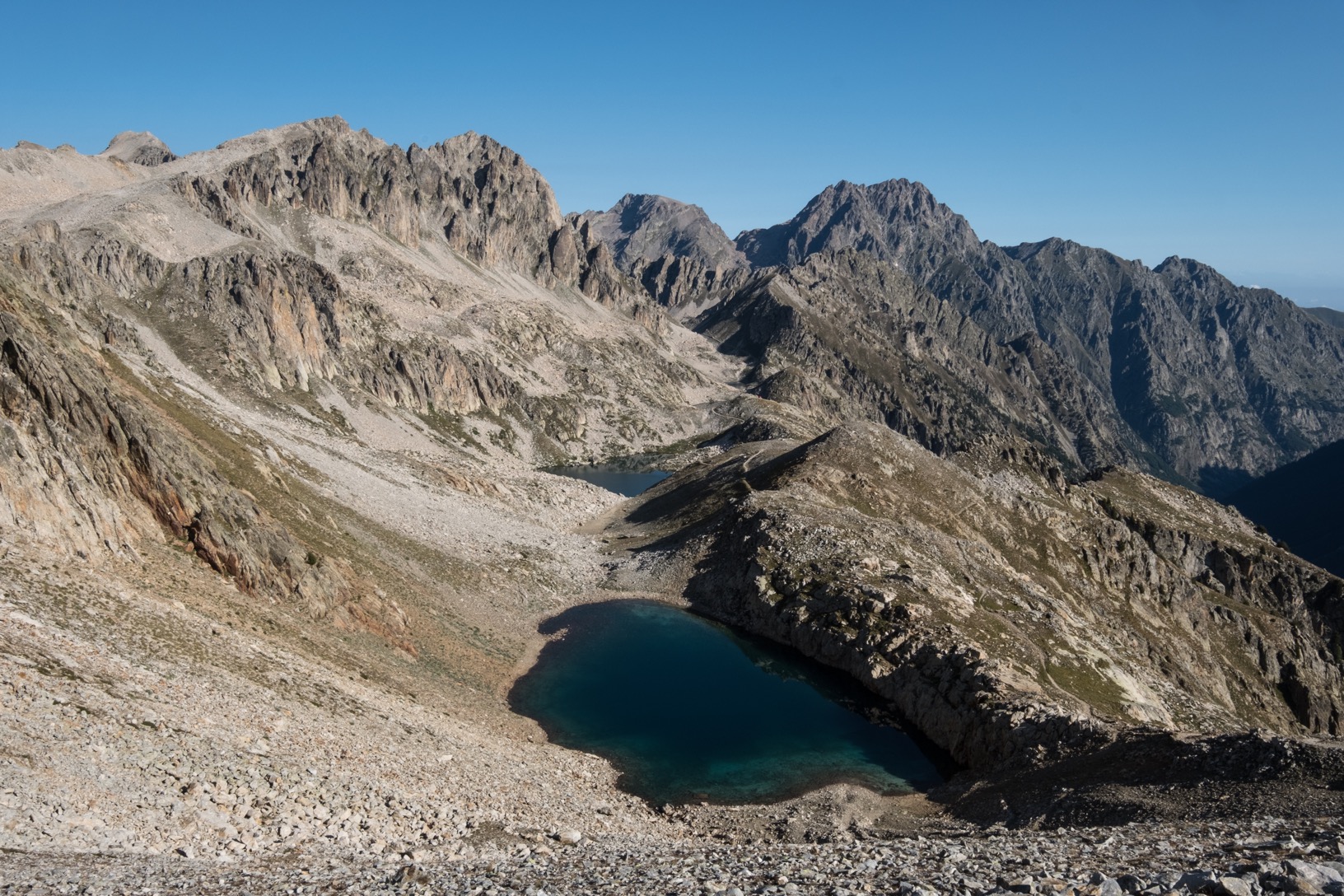 Take the gravel track downhill and then almost immediately leave it along the path crossing the Gesso della Valletta stream over a wooden bridge to the opposite side. The path flanks the stream for a while and then leads us towards a grassy hillock. Some patience is needed to tackle an infinite number of hairpin bends between shrubs, pines, larches and firs under the imposing ridge of San Giovanni to reach the knoll (2050 m) and its beautiful view over Piano della Casa del Re.

After passing over a ridge, the path changes completely and a long traverse takes us around an impervious rocky rampart. At the end, more hairpin bends take us higher up and then, turning to the left, we pass over some smooth rocks where a small waterfall fed by the emissary of the lower Fremamorta lake flows.

After a last, steep and twisting section we emerge into the hanging valley home to lower Fremamorta lake (2359 m). Yet this is only the first spectacular glimpse.

Close by several dilapidated barracks, we come up to the paved military road from Colletto del Valasco (north) on the way ot Colle di Fremamorta hill (south) and makes the route much easier. We take it to the left and after a few hundred metres reach the enchanting middle Fremamorta lake (2380 m), set in the scree beneath the granitic southern Testa di Bresses.

We pass around it on the left and do not take the cart track going downhill; after a few more hairpins, we take a track on the left up to rocky hillock where the enchanting Guiglia bivouac (2420 m) stands – a spectacular viewpoint over the entire Argentera range. Some of the most famous mountains in the entire province of Cuneo stand in front of us: the slant, four-sided profile of the famous Corno Stella (3050 m) is clearly visible to the left of the northern (3287 m) and southern (3297 m) peaks of Argentera. The fact that it is not as high as the main peaks should not mislead us, since it is much more difficult to climb.

Moving beyond the bivouac, we rejoin the cart track near the upper Fremamorta lake, the largest of them all.

It is worth continuing a few dozen metres higher up to the second, smaller lake close by, set in a small hollow. The shores of these lakes are ideal places for a relaxing break. Resuming our trek, we return to the Umberto I barracks where a signpost near a ruin directs us to the mule track descending northwards.

We traverse under the ramparts of the lakes precisely at the feet of the Guiglia bivouac. Pass by the mule track on the left that would take us back to the middle lake and continue the descent in the opposite direction. After a few hairpins, a long traverse take us over a ridge, after which we reach a crossroads (signs on a boulder). Both directions join up again lower down but we recommend the one descending to the left which is faster and more direct.

After crossing the mountain pasture (gias) we can just see lower down, we resume the steep descent and then, much lower, rejoin the other track upstream of the idyllic and grassy Plan della Casa del Re plateau.

We reach the cart track clearly visible on the opposite side. It will now take about forty minutes of downhill walking along the mostly gravel track that becomes paved at the end, before returning to the car park at the end of a tour in view of the most imposing peaks in the Maritime Alps.

One of the most spectacular high altitude trails in the Maritime Alps - the so-called "Mountains of Kings" because they were once part of the hunting reserve of King Vittorio Emanuele II. The itinerary crosses the beautiful Valasco plateau, dominated by an amphitheatre of peaks standing at around 3000 metres,…