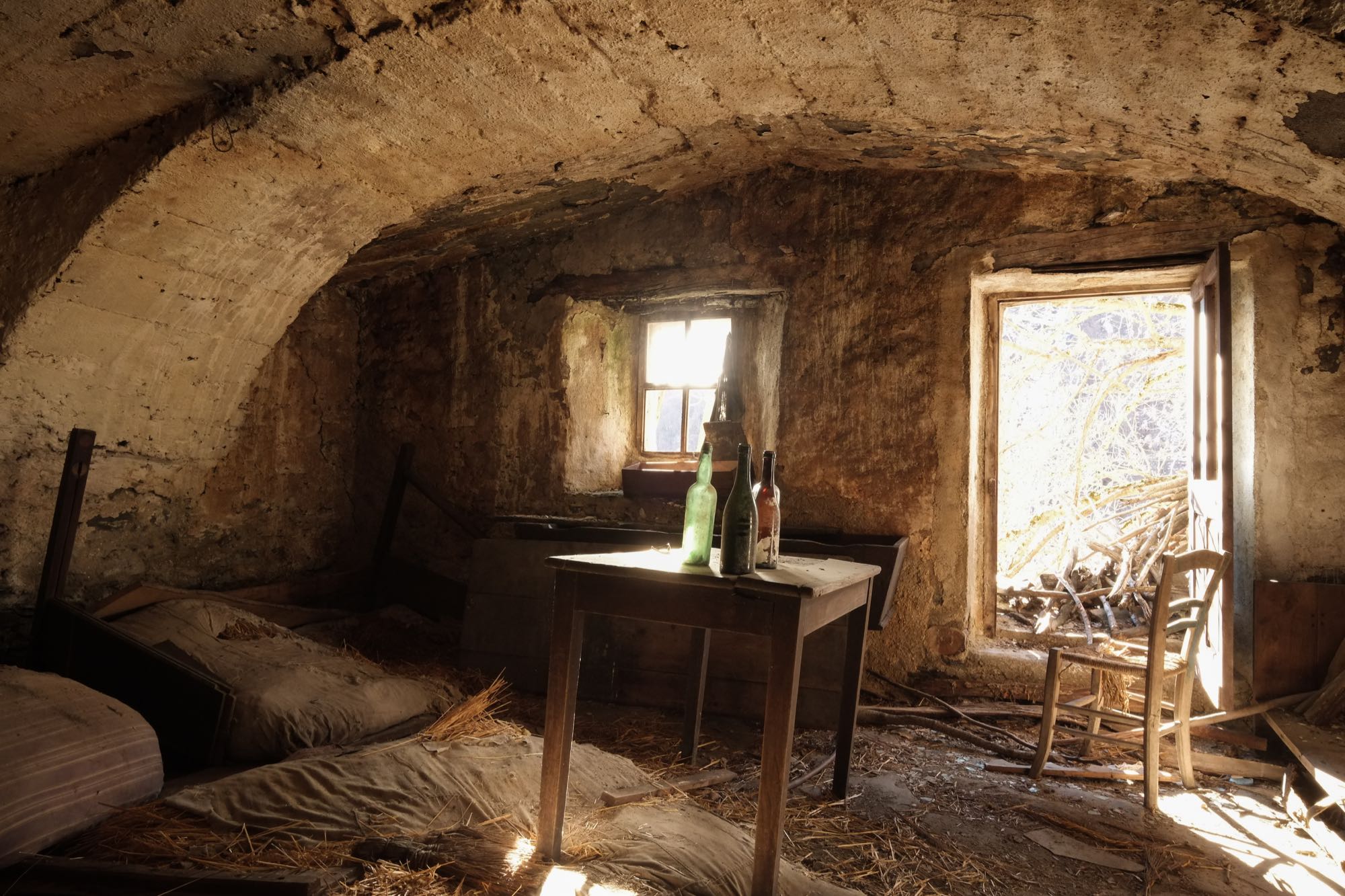 Return to the asphalt road as far as the last bend and then take the road (signposted) towards Valliera and Narbona (l’Arbona in Provençal).

Soon afterwards, at the crossroads, we leave the road to Valliera and instead take the trail to the left which cuts across the sides of the steep slopes of the Narbona valley.

During the first stretches of the climb, on the right we can see a curious stone massif that was used as a “resting place for the dead”: in winter, the deceased were kept in the haylofts in the village and only taken to Colletto cemetery when the snow no longer posed problems.

The trail continues and reaches the scenic Narbona wayside shrine on a hillock offering marvellous views of Campomolino below us and the sharp Rocca Cucuja (2144 m).

Moving around rough, rocky outcrops, the mule track continues at a safe distance from the valley bottom, with slight up and downs between birch and ash trees as well as some junipers. To the right, we can see the Rocche la Bercia much higher up; we will pass close by it on the return trip. Crossing numerous small side streams along the way, we reach the crossroads with the path coming up from Campomolino.

Further on, we reach to a stone building named Il Tech (1406 m). Not far after, we cross a torrent that collects its water from a narrow mountain valley higher up and then climb in a zig-zag fashion towards a long avenue of ash trees leading us into the hamlet of Narbona (1495 m).

This hamlet was inhabited until the 1950s but is now in a state of utter neglect and abandon. Making our way through the rubble of the old houses and after passing the chapel of the Madonna della Neve where prayer benches are still present, while paying close attention to possible instability, we wander among the many old houses that have already collapsed or are about to do so. Some of these homes still have old furniture, bed headboards, knick-knacks and much else besides.

The efforts of many volunteers ensured that a part of all this was saved in 2013 and taken, with the help of a helicopter, to the Campomolino Ethnographic Museum, where the mountain environment of Narbona was re-created. Many other items have been looted.

Nevertheless, it seems all but impossible that so many people (at least 120 inhabitants before it was abandoned) lived in such an isolated and impervious location so far from everything else. The hamlet cascades down a steep bank and in winter is hidden from the sun, since it passes behind the peak of Mount Crosetta (2194 m).

Leaving Narbona and the path climbing to the left to the top of Crosetta and Mount Tibert, we continue the journey along the trail above the village continuing in the direction of the Grange Coubertrand (1614 m). Taking a slight climb, we reach them after skirting a ridge where the scenic point of the same name is located.

We follow the fairly new gravel road from Grange Coubertrand that climbs constantly but moderately, cutting over the western slope of the steep Balòu Ridge.

After the ridge, take the trail towards Rocche la Bercia and Colle la Bastia (1690 m, the highest point of the itinerary). We then begin the descent leading to the exquisite and sunny hamlet of Batuira (1612 m, fountain).

We continue the hairpin descent towards Valliera, without actually reaching this hamlet. We take a right turn at the crossroads and, shortly after, left towards Campofei (direct route). The road winds along the sunny mountainside, leaving us to admire the restored hamlet of Valliera in the distance nestled splendidly on its ridge.

We pass close by a wayside shrine as we approach the next hamlet – Campofei (1429 m) – which in recent years has seen some excellent restoration work. Following stone steps from the church square descending into the valley, a little below we keep left to return to Colletto along the trail.

During the steep descent into the ash wood, we pass close by a number of old stone houses (l’Arbre). Crossing a torrent over a bridge, we reach the wayside shrine of the Sacred Heart. We pass by the path branching off to the right and arrive shortly afterwards among the houses in Colletto, where it is well worth ending this trek by strolling through its characteristic alleys.

Monte Chialmo is part of the long ridge separating the Grana and Maira valleys as it rises up to Monte Tibert. Although not the highest peak, the summit offers a superlative and unexpected panorama: the horizon takes in the Ligurian Alps and the Cozie Alps dominated by the imposing bulk…