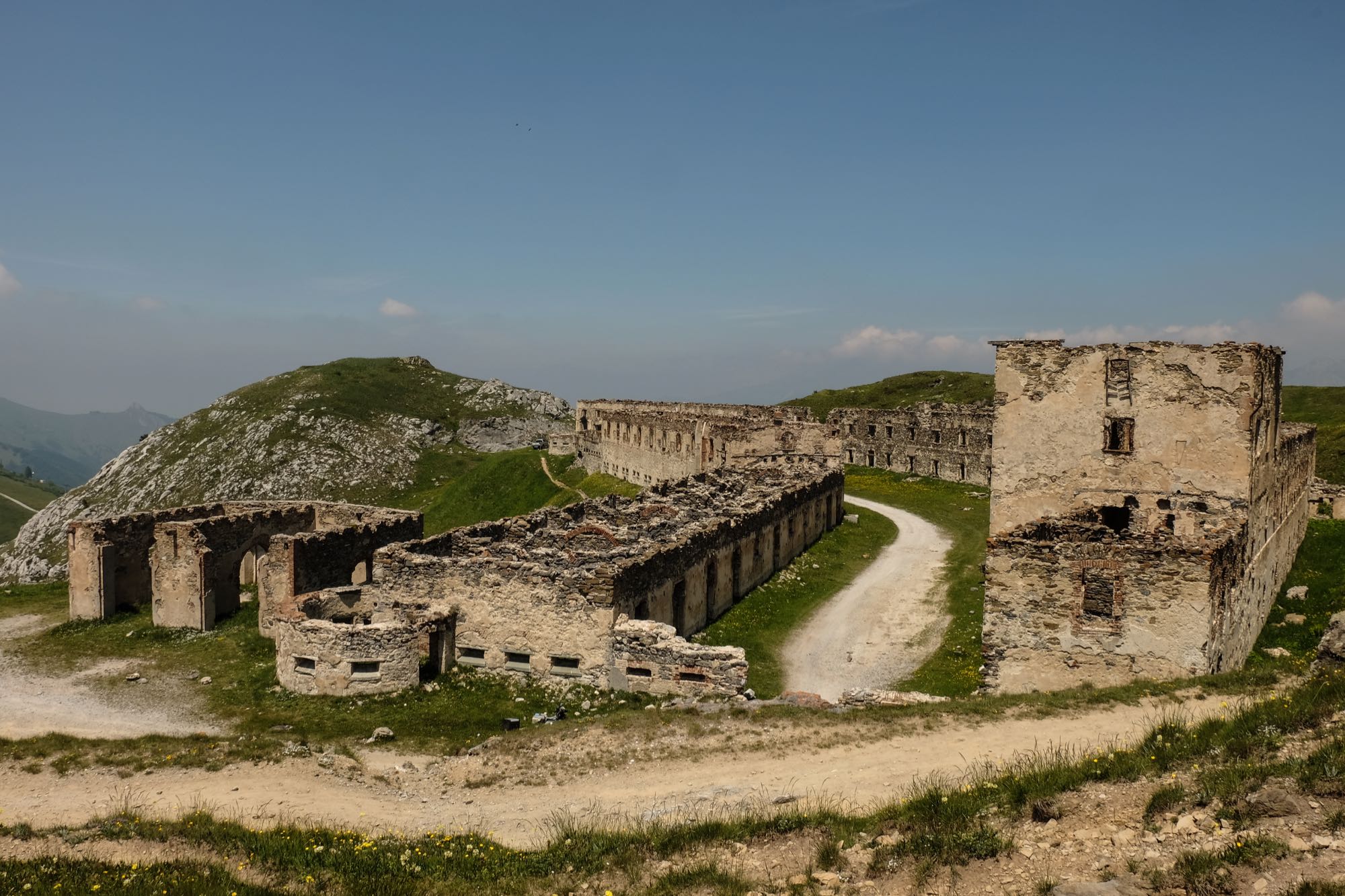 We take the road on the left that proceeds slightly uphill along the Italian slope (south-east direction). We are at the feet of the Forte Centrale, which we will pass by on the return trip, precisely on the vertical face of the Colle di Tenda road and railway tunnels.

After about one and a half kilometres, we leave the road to turn right on to the one closed to traffic (bar), thereby entering French territory: in 1947, following the peace treaty confirmed a few months later by a popular referendum, the upper Roya valley, then part of the province of Cuneo, was annexed to France.

We continue along an excellent gravel track ascending constantly towards the south-east.

This stretch is a chance to admire with wonder the infinite bends of the old road climbing from the French side. Passing by a turning on the left, we reach Forte Tabourde (1982 m). The view extends to the south-west with Mont Chajol in the foreground and Mount Bego in the middle ground, with Valle delle Meraviglie – famous for its rock carvings – behind them. The Rocca dell’Abisso massif (2755 m) and Mount Frisson stand out to the west precisely on the border. Forte Centrale is also clearly visible.

We continue along the all but flat path from Forte Tabourde eastwards; it moves around a ridge beyond which we enter the stunning Vallon Framoursoure valley. The next fort we will pass by is already visible on the opposite side: Forte Pépin.

Do not take the turning on the right descending towards Baisse de Lagouna. A little further on, we rejoin the military road which cuts through the central part of the small, lush valley. When the road turns to the right, we leave it to continue the constant ascent among flowers, initially on the path and then on the track, up to a minor pass. We are now just a few steps from the panoramic peak of Becco Rosso (2214 m), dominated by a large wooden cross, that we will pass on the way back.

The loop continues to the right (east) and takes us higher up along several zigzags (short cuts) before turning distinctly to the right in the direction of Forte Pépin (signs). We leave the road leading to the fort for a moment, which we will visit on the way back, to climb the grassy slope taking us to the panoramic view from Cime de Pépin (2344 m). In spring, this small peak is dotted with thousands of flowers of all colours. The breathtaking panorama from here opens out towards the flat Càrsene basin and Colle della Boaria. Several small bodies of water appear below us.

There are excellent views from here towards the peak of Mount Fascia (2495 m), the distant Marguareis (2651 m) and Mount Bertrand (2482 m), alternating with splendid glimpses over the Alta Via del Sale which, starting from Limone Piemonte, meanders towards Colle dei Signori and the Don Barbera Refuge before continuing towards the hamlet of Monesi (Triora) in the distance.

After a few hillocks and reaching the peak surmounted by a little stone man, we descend the valley to the south towards the imposing Forte Pépin (2263 m). It is in a better state of conservation than the previous fort, with massive walls surrounded by a moat.

The path on the right (north) continues towards the Perla and Boaria hills, but to avoid a landslide we retrace our steps for a few dozen metres uphill towards Pépin and its peak and then turn left down to the military road that leads us back to the small pass.

After a short detour to the nearby Becco Rosso (2214 m), we return along the path towards Colle di Tenda.

We then turn left to reach Forte Centrale (1908 m), evidently the most important of the three forts. It was built by the Italian Royal Army in 1881 to defend against possible French attacks. A visit around the outside of these gigantic defensive barracks which in war-time hosted hundreds of soldiers is not-to-be-missed!

We now descend from the fort to Colle di Tenda and then to the parking area where the car was left to complete a splendid loop perfect for late spring.

The main lakes of the entire Vermenagna valley lie above the lovely hamlet of Palanfrè. This delightful itinerary moves up the secluded Albergh valley to the evocative Frisson lakes, nestled in splendid wide valleys at the feet of the impressive pyramid of Monte Albergh itself.